The Shrines of France Pilgrimage Tour visits some of the most important churches, basilicas, and religious monuments in France. Beginning in Lourdes, the great shrine known worldwide as a place for physical and spiritual healing, this Shrines of France Pilgrimage Tour allows ample time to pray at the Grotto where Our Lady appeared to St. Bernadette under the title of “the Immaculate Conception” in 1858 and to bathe in the Miraculous Water. We will visit the Boly Mill and the Cachot, the prison where Bernadette’s family once lived, and we may participate in the nightly Candlelight Processions. In Toulouse, we will visit the Eglise des Jacobins where St. Thomas Aquinas is buried, before continuing on to the clifftop shrine of Rocamadour, home of an early Christian hermit named, Zaccheus, the “tax collector” of Jericho, who had come to the land known as Gaul with St. Veronica and St. Mary Magdalen to spread the good news. Here we will have Mass and visit the Shrine of Our Lady of Rocamadour containing the miraculous statue of the Virgin Mary and the tomb of St. Zaccheus. In Paray-le-Monial, we will visit the Chapel of the Visitation where Jesus exposed His Sacred Heart to St. Margaret Mary Alacoque, and in Taize, we will visit the place where the Taize  Community was founded and where people come for prayer, Bible study, sharing, and communal work, and contemplate what it is to live a life according to the Scriptures. In Nevers, we will visit the convent where St. Bernadette lived until her death in 1879, and see her incorrupt body, which is miraculously preserved. In Chartres, we will visit the famous Chartres Cathedral and see the stunning “Rose Window” made of stained glass. A highlight of the Shrines of France Pilgrimage Tour is the visit to le  Mont St. Michel which is built on the site where St. Michael the Archangel appeared three times. Originally founded as a sanctuary and consecrated in 709, it is now classified as a World Heritage Site by UNESCO, and it is said to be the most photographed monument in all of France. It is in Lisieux that the Shrines of France Pilgrimage Tour will visit the Shrine dedicated to St. Saint Therese of the Child Jesus and the Holy Face. Often referred to as “the Little Flower,” it was St. Therese who showed us the way to become a saint was to “do small things with great love.” We will visit the Basilica dedicated to the Saint whom Pope Pius X called “the greatest saint of modern times.” We will visit “the Carmel,” the Convent where she lived, “Les Buissonets,” her family home, and the Ancient Cathedral of St. Peter. In Paris, we will celebrate Mass at the Shrine of the Miraculous Medal where the incorrupt body of St. Catherine Laboure and the incorrupt heart of St. Vincent de Paul are located. It was here that her guardian angel led her to the chapel where the Blessed Virgin revealed the miraculous medal and the green scapular to her. The Shrines of France Pilgrimage Tour would not be complete without a panoramic sightseeing tour of the City of Lights to see the Notre Dame Cathedral, the Eiffel Tower, L’Arc de Triomphe, and Champs Elysees.  Why don’t you book your Shrines of France Pilgrimage Tour for 2023 or 2024 today?

The future belongs to Mercy from Sessions de Paray-le-Monial on Vimeo.  Chapel of the Visitation.

Depart USA for your overnight flight to Europe. Dinner and breakfast will be served on board.

Upon arrival in Europe you will connect with your flight to Toulouse, Pau or Lourdes airport. Upon arrival you will find your luggage and exit the baggage claim into the arrivals hall where you will be greeted by a tour guide and/or driver. You will be escorted to the vehicle which will then take you on your scenic drive to Lourdes. Upon arrival you will check in to your hotel and relax or explore before dinner. Following dinner you may choose to participate in the candlelight procession before retiring for the evening.

During the next two days in Lourdes you will have time to pray with your fellow pilgrims from around the world. During your trip you will have an opportunity to: Attend Mass at the Grotto, watch a video presentation telling the story of Lourdes, and walk in the footsteps of St. Bernadette. See Boly Mill where St. Bernadette was born, and the “Cachot,” an abandoned prison where Bernadette’s impoverished family lived. Join your prayers with those of pilgrims from around the world as you pray for the sick, drink water from the miraculous spring or submerge yourself in the healing baths. Experience Christ’s love as you walk the lifesized Stations of the Cross overlooking the holy Grotto. Kneel in the chapel built on the very rock of the Grotto, in obedience to the request of the “Immaculate Conception.” Evenings are free for optional Blessed Sacrament Procession before dinner. Your role in the universal church will have new meaning as you join the candlelight procession and group rosary. (candle light procession and group rosary April through October only).

After an early breakfast we make our way to Toulouse. Once an important Roman colony, Toulouse is full of religious and historical treasures. The Basilica of St. sernin is one of the finest Romanesque churches in France. St. Thomas Aquinas is buried in the Eglise des Jacobins, and it is also the proud home of 20 historical pipe organs (more than any other city in France). After our tour, we will continue on to Rocamadour, situated atop a rocky plateau overlooking the Alzou Valley. Rocamadour was the home of an early Christian hermit named, Zaccheus of Jericho. He died in 70 A.D. and had conversed with Jesus himself. Zaccheus was the husband of St. Veronica, who wiped the face of Jesus as he climbed to Calvary. Once we arrive, we will take time to visit one of its most important sites: the Shrine of Our Lady of Rocamadour. A complex of religious structures centered on a miraculous statue of the Virgin Mary and the tomb of an ancient saint. We enjoy a lovely dinner before returning to our hotel.

After an early breakfast, we begin our journey to Paray-le-Monial where we will visit the Chapel of the Visitation where Jesus exposed His Sacred Heart to St. Margaret Mary Alacoque during a number of apparitions, Reliquary of St. Margaret containing her relics, located underneath a wax figure of the saint. You will have the remainder of the day free to spend at your own leisure. Dinner and overnight.

After an early breakfast we depart for Taize, one of the world’s most important sites of Pilgrimage, bringing in over 100,000 young people from all across the world each year. The Taize Community was founded by Frere Roger in 1940 when he pondered what it really meant to live a life according to the Scriptures. He then began a quest for a different expression of the Catholic life. In 1940, he purchased a small house that would eventually become the Taize Community. People travel there each year for prayer, Bible study, sharing, and communal work. The community is currently led by Brother Alois, a German-born Catholic, who had been appointed by Brother Roger before his death in August 16, 2005. Return to Paray Le Monial for dinner and overnight.

After an early breakfast we will depart for Nevers by way of the picturesque Loire Valley. After taking the veil in 1867, St. Bernadette lived for 12 years as a member of the Congregation of the Sisters of Nevers. At least three times during her short lifetime, she received the last Sacraments. In addition to asthma, she was gradually struck by other illnesses, among them was tuberculosis of the lung and a tubercular tumor in her right knee. St. Bernadette eventually died at the age of 35. See St. Bernadette’s incorrupt body at the convent of St. Gildard, miraculously preserved since her death in 1879. Continue on to Chartres, where we will visit the famous Cathedrale Notre-Dame de Chartres. Not only is it one of the greatest achievements in history of architecture, it is almost perfectly preserved in its original design and details. Its extensive cycle of portal sculpture remains fully intact and its glowing stained-glass windows are original. It is also the only cathedral that conveys an almost perfect image of how it looked when it was built. We continue on to our final destination of Le Mont Saint Michel in time for dinner and overnight.

After an early breakfast we will spend the day touring Le Mont Saint Michel and the different stages of its construction that have now classified it as a World Heritage Site by UNESCO in 1979. It was here, Aubert, Bishop of d’Avranches, founded a sanctuary on Mont-Tombe, after 3 successive appearances by the Archangel Michael. Consecrated in 709, the church has attracted both the curious, and pilgrims from all over the world ever since.

After having been made into a prison from the time of the French Revolution up until the time of the Second Empire, the Abbey became the responsibility of the Historical Monuments Department in 1874. Since 1969 the Abbey has been home to a monastic community, ensuring the continuation of a spiritual presence. Rightly called “The Wonder of the Western World”, the Mont-Saint-Michel is surrounded by a magnificent bay, which is the theatre of the greatest tidal ranges in Europe, a wonderful view on its own. Return to the hotel for dinner and overnight.

After an early breakfast we make our way to Lisieux where we will enjoy a tour of the home of St. Therese whom Pope Pius X called “the greatest saint of modern times.” Her extraordinary love for God and service to humanity comes alive as you visit the Basilica of Saint Therese, one of the biggest and most magnificent religious structures built in the 20th-century. While in Lisieux we will celebrate Mass will be celebrated. We will stop at Les Buissonets, St. Therese’s family home, there on display are relics, clothing, and personal objects belonging to the “little flower.” Before leaving, tour the ancient Cathedral of St. Peter and the Carmelite Convent. We will continue on to Paris in time for check in, dinner and overnight.

After an early breakfast, we depart for our tour of Paris. We will begin with holy Mass at the Shrine of the Miraculous Medal. View the incorrupt body of St. Catherine Labouret whose guardian angel led her to the chapel where the Blessed Virgin displayed a vision of the miraculous medal and later the green scapular. The Virgin promised bountiful graces for all who wore these. You can receive a plenary indulgence.  Next, we depart on our sightseeing tour which includes the Notre Dame Cathedral, the Eiffel Tower, L’Arc de Triomphe, and Champs Elysees. Enjoy other sights on this mostly panoramic tour. We enjoy a lovely dinner before returning to our hotel for a restful overnight.

After breakfast, we transfer to Paris Airport for our return flight home.

Map of the Shrines of France Pilgrimage Tour

Photos of the Shrines of France Pilgrimage Tour

Dates, Pricing, and Booking for Shrines of France Pilgrimage Tour

FAQ for the Shrines of France Pilgrimage Tour 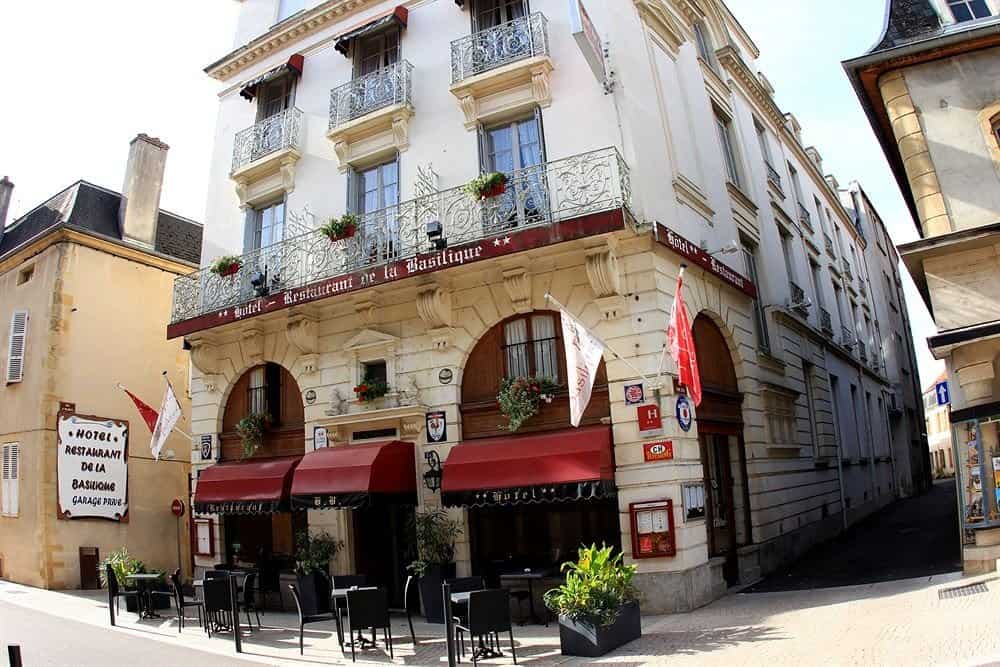 Click here for information on hotel accommodations for the Shrines of France Pilgrimage Tour.

Would you like to lead your parish or group on this pilgrimage?  Click Here to get started.

What does Mont St. Michel, one of Europe’s major pilgrimage destinations and a holy island now a UNESCO World Heritage Site, look like?

Some of the more famous music from the Taize monastic community: 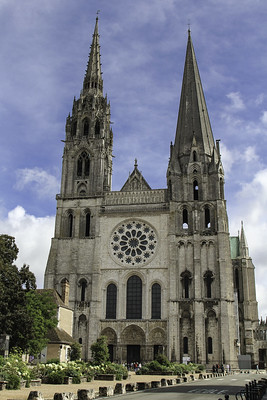