As one of 10 children born into a poor Polish family, Saint Faustina felt the calling for a religious vocation from the age of seven, and at the age of twenty, she entered the Congregation of the Sisters of Our Lady of Mercy in Warsaw.  On the first Sunday of Lent in 1931, Jesus appeared to her at her convent in Plock, Poland. He appeared wearing an ankle-length white robe with his right arm raised in blessing and his left arm touching his robe at his chest. From the area of His heart, two large rays came forth: one red and the other translucent. Jesus told her: Paint an image according to the pattern you see, with the inscription ‘Jesus I trust in you’”.  He then went on to say that he wanted this image venerated in the chapel at the convent and then throughout the world.  It is this vision that inspired the image that is now known and recognized throughout the world. The original painting is actually found in Vilnius, Lithuania, which is where Saint Faustina was residing when the image was commissioned, and an artist was hired. Jesus explained also that He wanted the first Sunday after Easter to be proclaimed “Divine Mercy Sunday” and that the feast is preceded by a novena to Divine Mercy beginning on Good Friday. 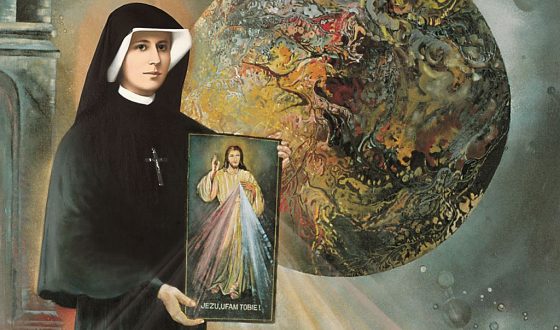 In her diary we learn that Saint Faustina’s principal task was to pass on to the Church and world the Message of Mercy, sharing the depth of Jesus’ Mercy and asking us to entrust our lives to Him. She asked us to pray the Chaplet of Divine Mercy, particularly during the “Hour of Mercy,” the Hour of Jesus’s Death on the Cross. She suffered greatly from tuberculosis, offering it up as a voluntary sacrifice for sinners and as the Apostle of Divine Mercy. She also experienced many extraordinary graces such as apparitions, ecstasies, the gift of bilocation, invisible stigmata, reading into human souls, the mystical betrothal, and nuptials.

Saint Faustina died in Krakow on October 5, 1938, at the age of just thirty–three. Out of her charism and mystical experience grew the Apostolic Movement of the Divine Mercy which continues her mission, proclaiming the message of Mercy to the world through the testimony of life, deed, words, and prayer. Saint Faustina often wrote about her desire to be raised to the glory of the altar as a great saint. In her diary she wrote:

“My Jesus, You know that from my earliest years I have wanted to become a great saint; that is to say, I have wanted to love You with a love so great that there would be no soul who has hitherto loved You so”(Diary 1372).

Link to JPII’s Homily at her Canonization on Divine Mercy Sunday, April 30, 2000

During a Pilgrimage to Poland, you will have the opportunity to visit the Convent and Shrine in Krakow during the Hour of Mercy to pray the Chaplet of Divine Mercy and reflect on the life and writings of this extraordinary saint. You will also walk in her footsteps, visiting St. Casimir, the childhood church of Saint Faustina in Świnice Warckie where she was baptized and received First Holy Communion, and by visiting the convent on Zytania St. in Warsaw.

Our Lady of Czestochowa

Another very important stop on the Divine Mercy Pilgrimage is Czestochowa. Our Lady of Czestochowa, or the Black Madonna of Poland, is a very famous painting depicting the image of the Blessed Virgin holding the Child Jesus. Under this title, Mary is the Patron and Protector of Poland. Since the face of Mary is very dark, she is often referred to as the Black Madonna. This darkening of the image comes from centuries of being hidden and the many years of soot and smoke from candles illuminating the icon. The picture follows the traditional form of an icon. Mary gestures toward Jesus, directing the attention away from her and pointing to Jesus as the source of salvation. The child Jesus extends his right hand in blessing to the viewer of the painting and holds a book of the gospels in his left hand. As in many icons, Jesus looks like a small man, reminding us that Jesus, while still a child, is fully mature in His Divine nature. 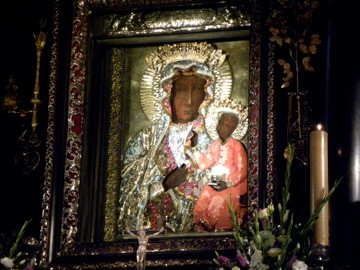 The painting of the Madonna has a long history. Legend has it that it was painted by Saint Luke on a piece of a cedar tabletop built by Saint Joseph. Some even say it is part of the table used at the Last Supper. Saint Helen found this painting when she went to Jerusalem in search of the true cross. She gave the painting to her son, Constantine. When the city of Constantinople was invaded by the Saracens, the people prayed to Mary and the city was saved. This began the great devotion to the Blessed Virgin Mary attached to this painting.

The history of the painting is more accurately documented in 1382 when Prince Ladislaus was the owner of the painting. In that year, when the Tartars were invading the Prince’s palace, an arrow hit the painting, lodging in the throat of Mary. Prince Ladislaus decided to take the icon to Opala, the town where he was born, in order to keep the picture safe. On the journey there, he stopped and spent the night at Czestochowa. The next day, as they began to continue the journey, the horses pulling the wagon with the painting of Our Lady refused to move. Prince Ladislaus took this as a sign that the painting was to remain in Czestochowa. The icon was placed in the care of the Order of the Hermits of Saint Paul at their monastery called the Mount of Light, or in Polish, Jasna Gora. The icon of the Black Madonna, Our Lady of Czestochowa, is there to this day.

The icon was again in danger and damaged in 1430 when the Hussites invaded the monastery. Twice the painting was struck with a sword, and before it could be hit the third time, the looter fell to the ground and died. Despite trying to repair the painting, the sword cuts and the arrow wound are still visible in the painting today.

In 1655 Swedes invaded Poland. The people prayed to Mary, and Poland was again saved from the invaders through the intercession of Mary. Our Lady of Czestochowa was thus crowned as the Queen of Poland, and this icon became the symbol of national unity.

There is even a modern legend from the time Russia invaded Poland in 1920. The Russian army was ready to attack when an image of Mary was seen in the clouds. At this vision, the troops withdrew, and Poland was again saved. The Church honors Mary, the Mother of God, in various ways. Mary can intercede for us, as is evidenced by the many healings and miracles that have been attributed to prayers to Our Lady of Czestochowa over the years.

This is the town where our beloved Pope John Paul II was born and raised. The oldest church in Wadowice is the parish church in the market square, now called the Church of the Presentation of the Blessed Virgin Mary.

For almost a hundred years the portrait of Our Lady of Perpetual Help hung in the church, and young Karol Wojtyla developed a profound and personal devotion to her image. On March 25, 1992, Pope John Paul II gave this church the status of a Basilica Minor. After celebrating Mass in the church, you will have to visit the baptistery where the future pope was baptized on June 20, 1920, and pray in the very place where he served mass and spent long hours in adoration.

Just around the corner from the Basilica is the house where Pope John Paul II was born on May 18, 1920. His family lived in two rooms, but the surrounding apartments were obtained after his election in order to make a museum that now displays many of the family’s possessions, photographs, and items from his pontificate.

While in Poland, one must stop at the Nazi death camp known as Auschwitz. This infamous concentration camp is best known for being the place where the largest number of European Jews were murdered during World War II. One lesser-known casualty is a Polish Priest, Maximillian Kolbe, who died here and became a martyr, a true hero for our time.

When Germany invaded Poland in 1939, the Franciscan Friar, Maximillian Kolbe, began to organize a shelter for over 3,000 Polish refugees, among whom were nearly 2,000 Jews. The friars shared everything they had with the refugees. They housed, fed, and clothed them, and brought all their machinery into use in their service. The community came under suspicion and inevitably, in May 1941 the friary was closed down and Maximilian Kolbe, along with four companions were arrested and taken to Auschwitz, where they worked with the other prisoners. Whenever a prisoner escaped from the camp, the Nazis selected 10 others to be killed by starvation in reprisal for the escape. One of the 10 selected to die, Franciszek Gajowniczek, began to cry: My wife! My children! I will never see them again! At this Maximilian Kolbe stepped forward and offer himself in the man’s place, and on August 14, 1941, he ultimately died as prisoner number 16770. Today St. Maximillian Kolbe is remembered as someone who lived what he preached, a sublime example of the love of God and one’s neighbor.

These are just some of the highlights that you can experience on a Divine Mercy Pilgrimage Tour to Poland. Pick from one of our many departures.